In a letter addressed to the curator, she refers to the cap as “the Welsh wig treasured at the back of my grandfather’s desk”. She goes on to state the following: “There is no indication as to where it was made, but my grandfather was the only son of William Horsfall who was shot by the Luddites, and being in Yorkshire in touch with woollen industries sic.”

Rutt mentions it in ‘History of Hand Knitting’, and it has been catalogued by the Museum as a sample sent from Bangor to Leeds, with the intention of supplying soldiers fighting in the Crimea. This is based on some text on a label affixed to the tin in which is reached the museum.

I’ve had permission to share photos! So here it is, the legendary Welsh Wig in all is somewhat daft glory: 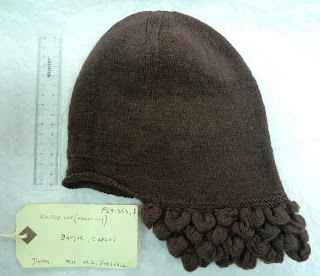 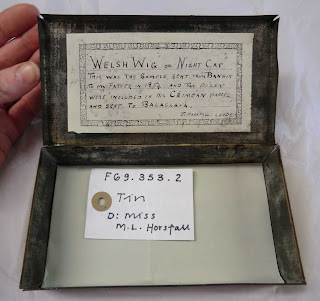 I was priviledged to be permitted to handle the hat extensively, so I’ve had a chance to see it inside and out, the curls are particularly interesting: 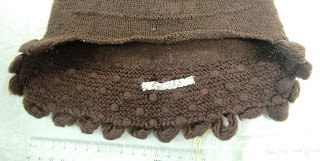 I had several hours with the hat, so I was able to measure and count everything in detail, to the point where I was able to write up the pattern with the hat in front of me to cross reference, so pending me knitting it up to double check my calculations (its 9 st to the inch, in singles, so its pretty fine) I should be able to make the pattern available soon! Perfect for all the Crimean re-enactors out there.

Yay, I love my job! A huge thanks to Elen Phillips, Texile Curator at St Fagans for arranging access today.

I'm collating references to Welsh Wigs to go with future updates, and am hoping to track down an image somewhere of one in use, but so far, I'm still searching for that one. If anyone happens to know of an image of a Welsh Wig of this type in use, please let me know.The search is slightly complicated because the term 'Welsh Wig' gets applied to a fair range of hats across a relatively wide daterange.

Read part two of my explorations of this hat here:
Posted by Sally in Wales at 17:32

How exciting! I shall look forward to seeing more.

What an odd piece! How lovely you were given the opportunity to study it thoroughly. Thank you for sharing, and I look forward to further developments - and a pattern!