How to Build a Neolithic 'Wendy House'

Sometimes we are lucky enough to be able to work with beautifully reconstructed permanent buildings based closely on archaeological evidence, such as the recently built Neolithic houses at Stonehenge. If we're looking a bit cold in this photo, it was taken in January, hence the additional furry legwarmers (incidentally, Neolithic clothing isn't bad for layering and keeping warm ) 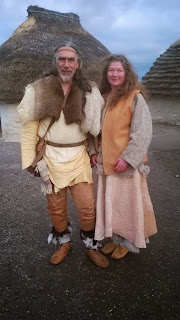 Even though people are becoming more settled by the Neolithic, its probably not the only house structure available to them. We know that from the earliest evidence onwards people have constructed simple shelters using locally available materials, intended to be used for a few weeks or a season whilst hunting, foraging or even, perhaps, visiting other communities or ritual sites.

The normalisation of farming doesn't happen overnight and its likely that for a very long time groups of people still go off on prolonged hunting or foraging expeditions, or perhaps build seasonal settlements whilst herds are kept on pastures away from the main village. To this day, in Alpine regions known for transhumance, there are structures of stones that date back into prehistory believed to be associated with the base of temporary shelters.

Last Autumn, we built a conjectural Neolithic campsite with James Dilley, including a rectangular structure based on a sloping A frame of sticks, covered with hides (allegedly from our 'hunting expedition'). 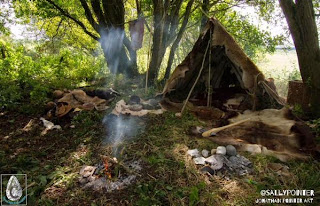 This sort of thing is fine when you have plenty of time to cut sticks, lash them all together, arrange the covering and get comfy, but we often have to set up 'camp' just for a few hours when doing education work, and we wanted something that would allow us to discuss the difference between permanant and temporary dwellings,  materials, construction and daily life, all without it taking longer to set up and take down than we have available.

So, we set about building a flat-pack structure that we could put in the van easily, set up in a few minutes and properly risk assess so we know it wasn't likely to fall down in the middle of a school playground. Yes, there will have to be some compromises, but as far as possible we want groups using it to be able to suspend disbelief and imagine themselves sleeping and basing themselves around a camp for a while.

We can't help it, very soon we started calling it the Neolithic Wendy House, and its stuck. 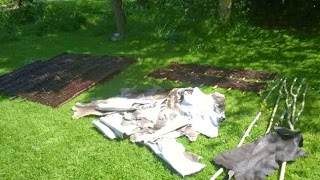 To take it all down later, we just need to unlash the top ridge pole, remove the back extension, fold it all up and wrap it ready to go into the van. Yes, its heavy, but its not unmanageable. Putting it up next time should be fast too. We might also add some netting with stone weights to help hold down the roof, it is thought that some pierced stones found on early sites may be from similar netting and it would be a nice way to include another technique.

Is it absolutely accurate? No, of course it isn't, but we think it creates a structurally stable and plausible setting in which children can role-play and discuss life in the past with us during sessions. We're always happy to hear constructive suggestions that will make it even better for this purpose.

Plus, you are never to old to build a den...
We'll be giving this its first public outing at Bryn Celli Ddu this coming summer solstice.

We are based Wales and travel around the UK, if you know of an event or school that might like to book us for a session on Neolithic life and crafts, do get in touch!

Thrum caps go back to at least the 16th century, where they were popularly worn by sailors who found the thick, shaggy pile of the cap a practical warm 'thatched roof' against bad weather. I regularly make these for re-enactors and am always on the look out for new-to-me images of these in use or the occasional very rare surviving example in museums around the world. 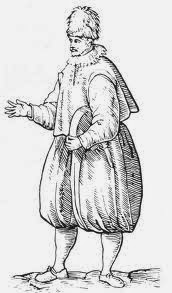 A few months ago, I was asked to make a modern interpretation of the thrum cap to be worn as camouflage in tule reed beds by a lovely gent in America.

We started with an image of the local tule. As you can see there are a huge range of shades and colour effects caused by light and shadow on the rushes here. 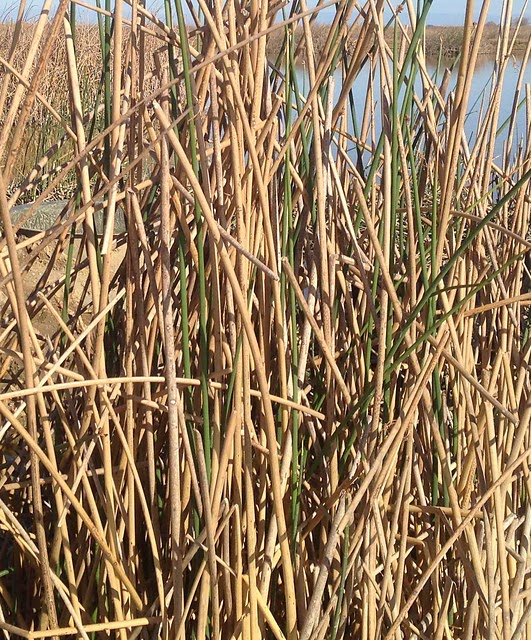 So, to get a clearer idea of the colour balance, I cropped the image and ran it through an image colour histogram programme to give me an approximate reference of the proportions of colours within the project. 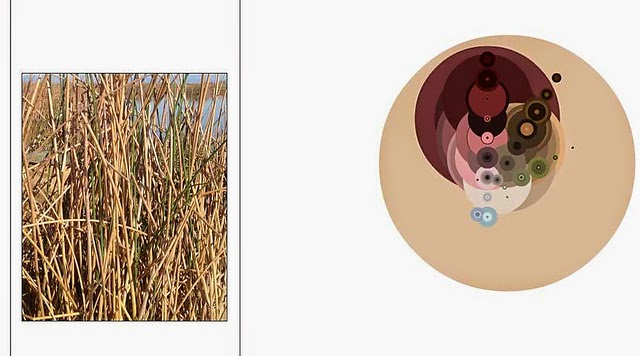 I then used this to select yarn, from which thrums were cut and knitted randomly, the only 'rule' being that I always used two different shades in each knot of thrumming, and avoided using the same two colours two stitches in a row. I also deliberately chose yarn in varying textures which would felt at slightly different rates in the final cap. The interior hat was worked in a neutral drab background shade. 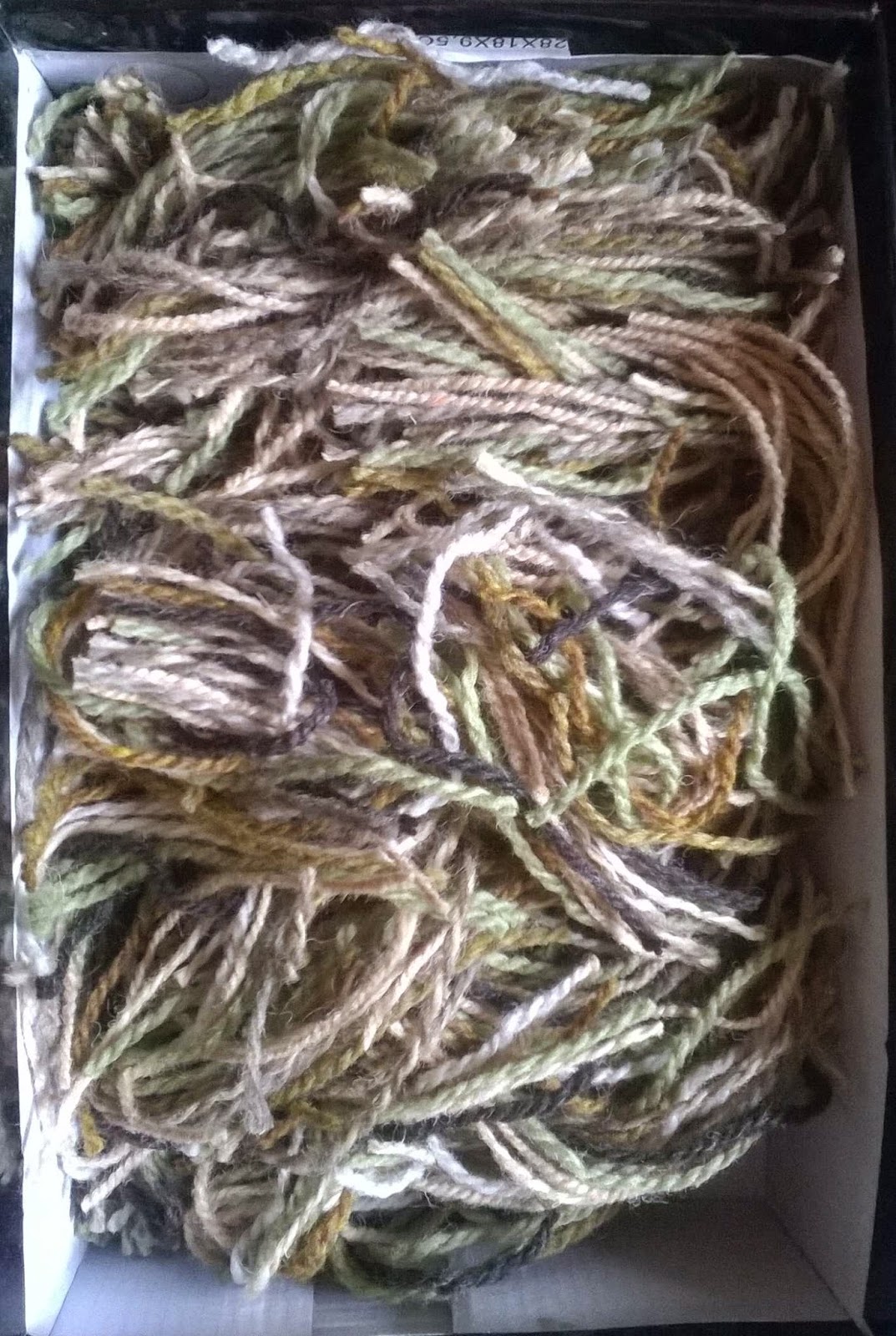 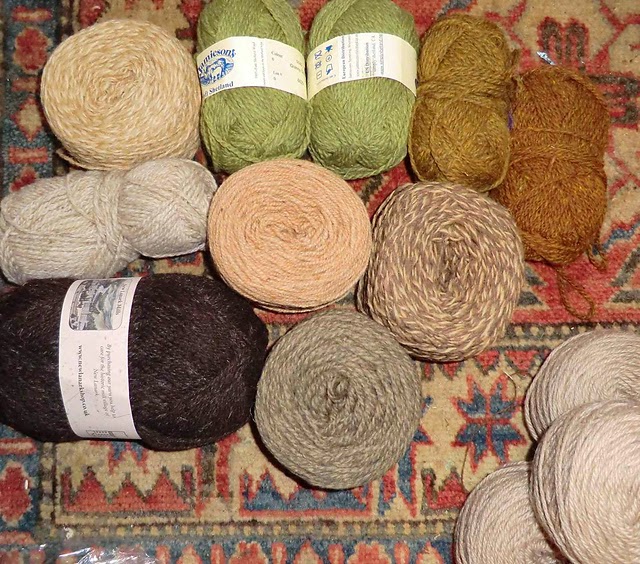 Also did a second version with the thrums somewhat more clustered to approximate a more traditional camo pattern. I still used two shades in each thrum to ensure a broken up effect but this time used the same shades for several stitches at a time to create a more solid block. 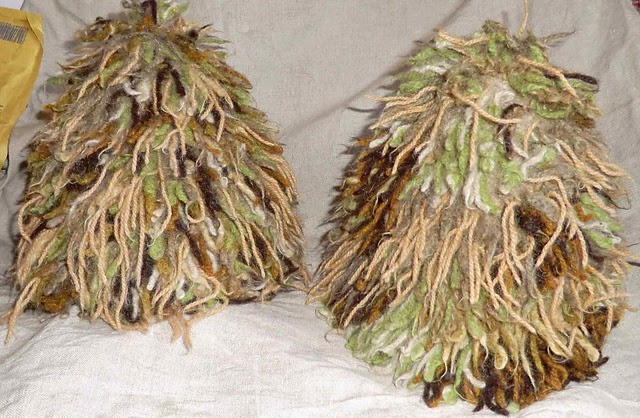 The hats were fulled and blocked, and went off to be field tested. They may look a bit odd sitting by themselves, but they are intended for a specific environment. Here's a couple of images showing just how nicely they blend into the background scenery. Warm and cosy for a long day out in the tule as well! We decided in the end that the more random selection of yarn in the first cap was ideal for this particular scenery. 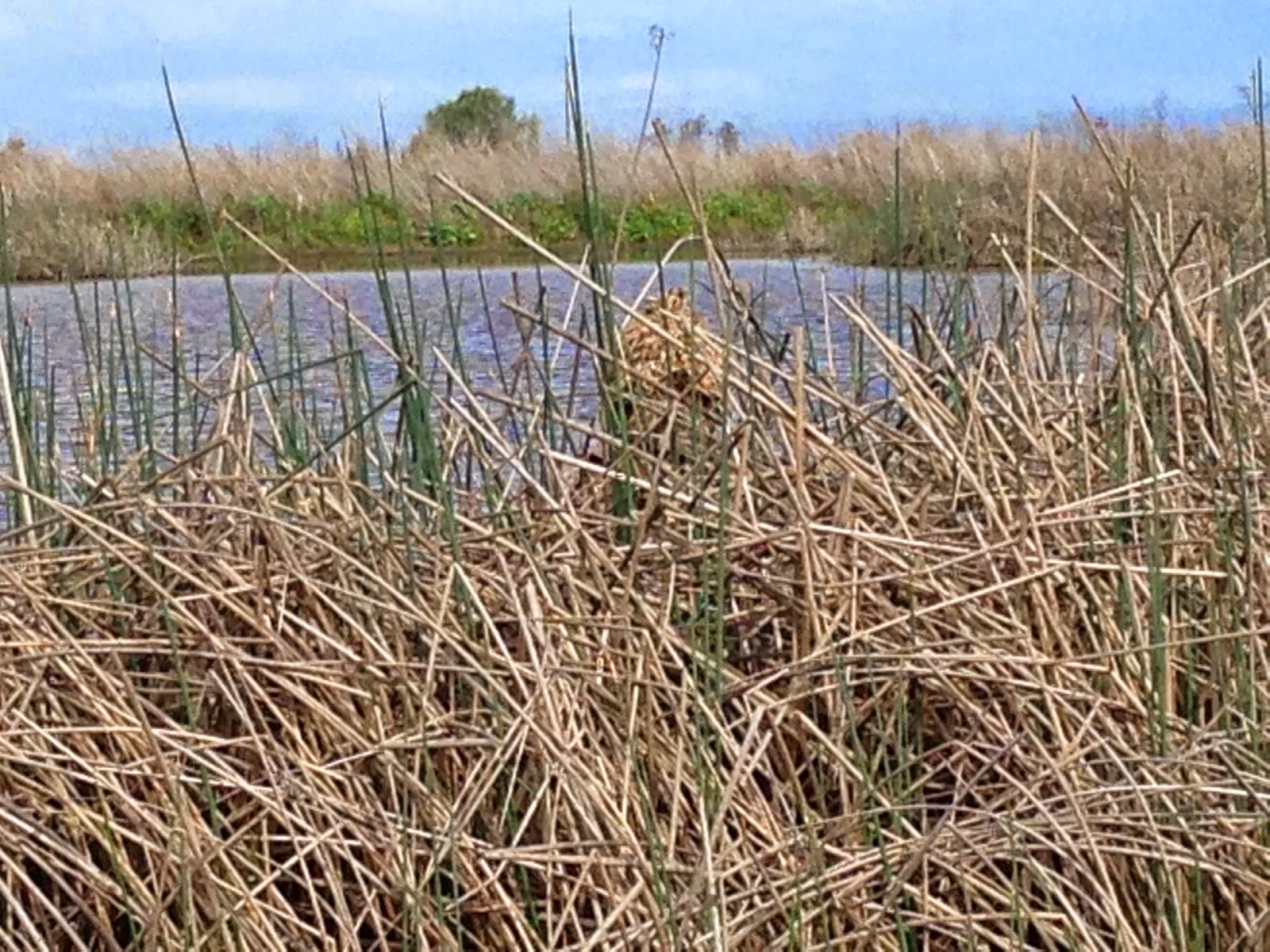 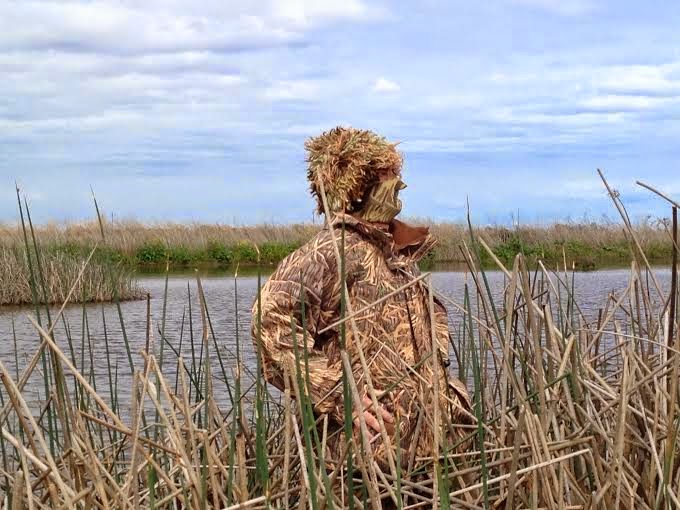 If you fancy trying this effect yourself, using a historic pattern with modern shades to create a whole new type of sporting hat, I do have a pattern for a Thrum Cap available for download via Ravelry, and as always, I do take commissions for hats.
Posted by Sally in Wales at 10:31 1 comment:

I've been fascinated for a long time by the often brightly coloured sandal socks that occur in Romano-Egyptian and Coptic Egypt. When first encountered by archaeologists and historians, they were assumed to be knitted, but it is now understood that these are made by a form of nalbinding, or single needle looping.

Nalbinding won't be what they called it of course, but its the term by which the technique is known today, and these particular socks use a stitch often called Tarim or Coptic stitch. Its not at all hard to work, but it is significantly slower than knitting, this pair took approximately 24 hours of work. A similar knitted pair worked at about the same final gauge would need just over half that time.

I based this adult pair of socks loosely on a child's pair at the British Museum, simplifying the colours to use two dyed and one undyed shade. 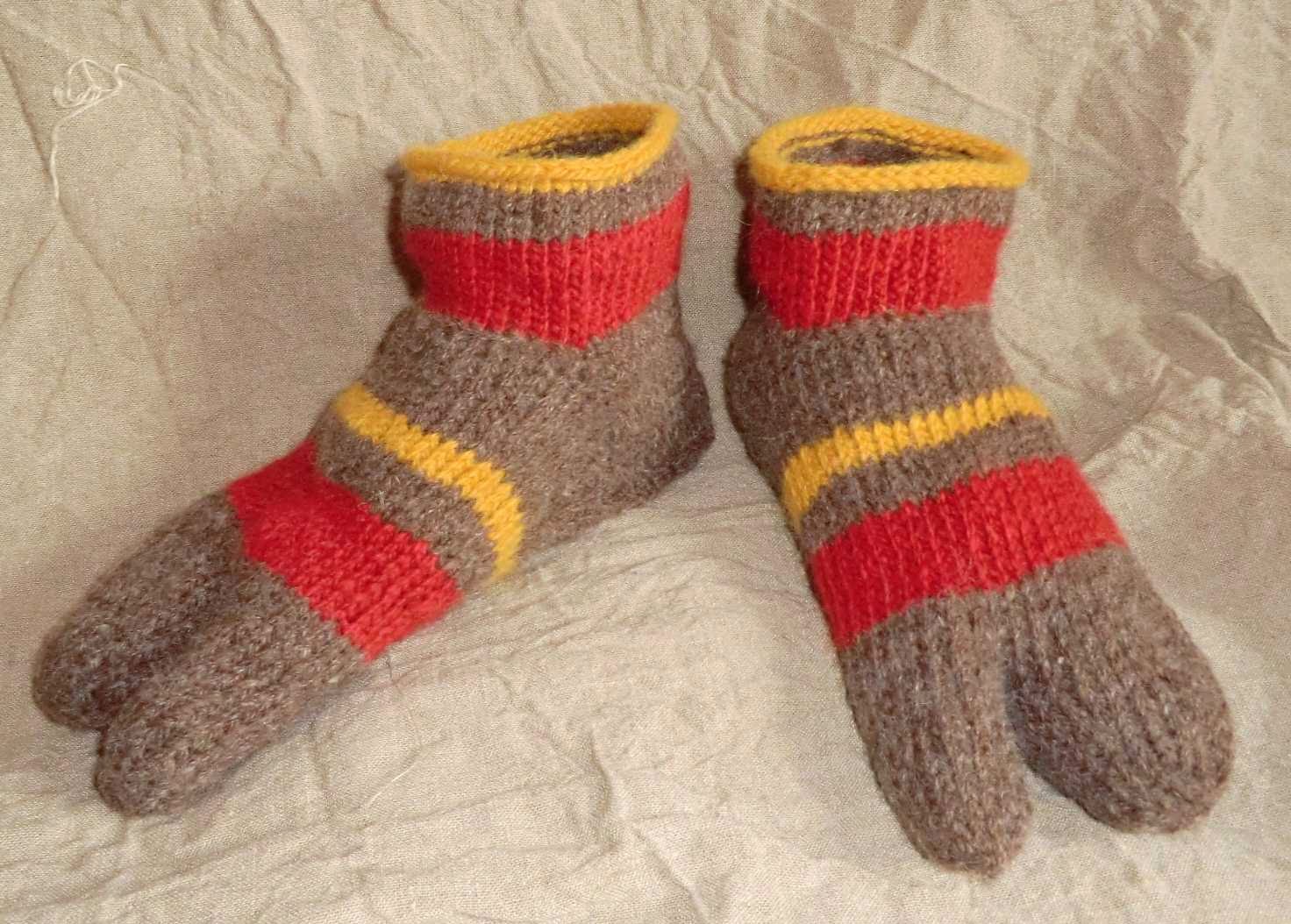 I've been a bit quiet recently, partly because I've been busy working on some replica artifacts and costume to be used in the Neolithic houses being built as part of the new Stonehenge visitor centre. As well as the houses themselves, English Heritage have commissioned a wide range of garments and objects to be used as handling items to help illustrate aspects of everyday life in the Neolithic.

Part of my brief is to create a range of cordage based on materials known to have been used during the Neolithic, and this includes deer sinew.

Its amazingly tough stuff, until you get a nice round rock and give it a good pounding to soften it and break up the fibres. Once you've done that, you can twist it up into fine, strong cordage with a huge range of end uses.

Here's just one picture of a partly pounded piece of deer sinew and some finished cord, if you'd like to read more, I've written a guest blog post on the Stonehenge Neolithic Houses project page which explains in step by step detail. 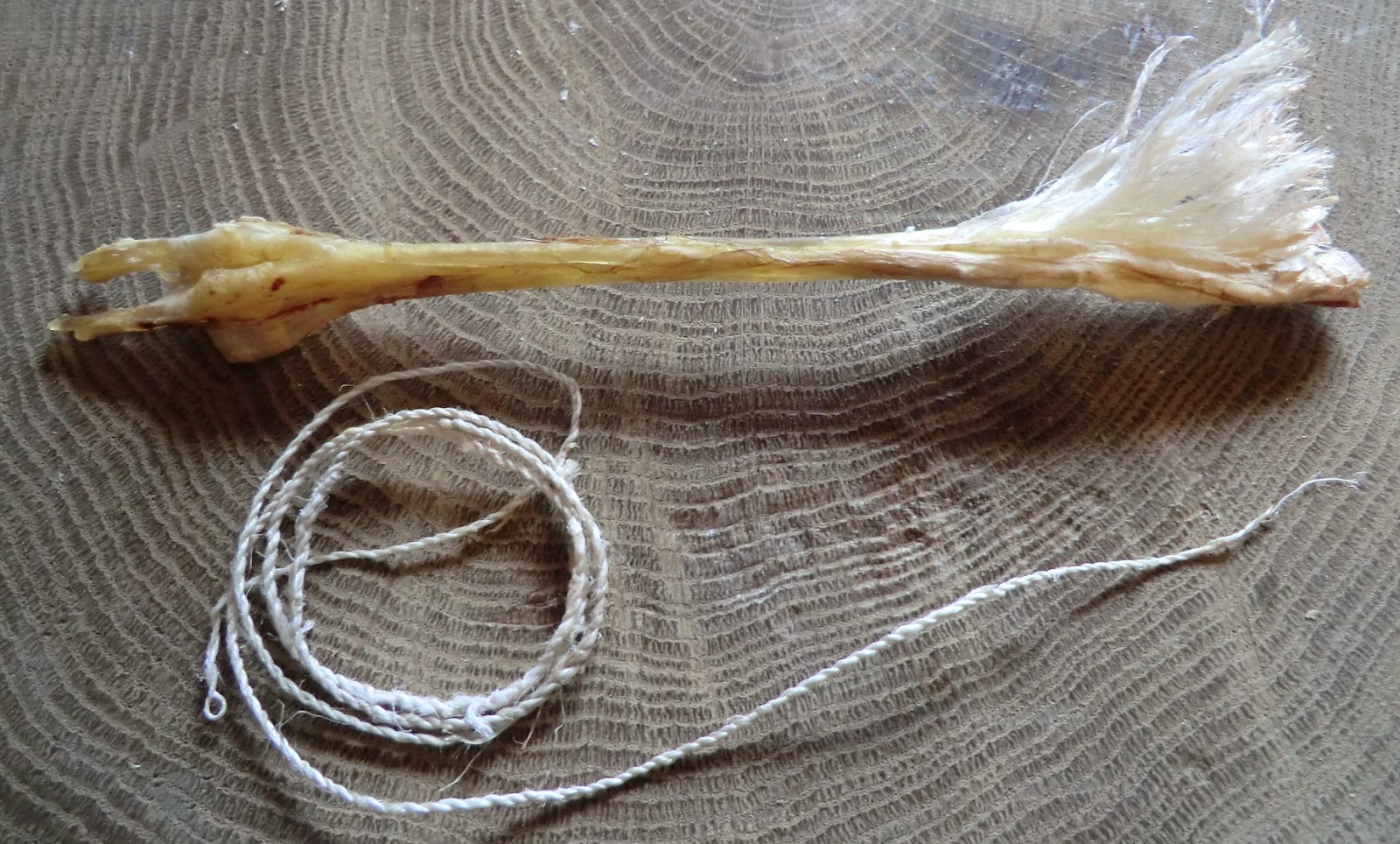 You may recall my earlier adventures with the Welsh Wig in which I visited an extant example and reconstructed the likely pattern for it.

With the assistance of the lovely Historic Knitting group on Ravelry I've now assembled some references to help put this funny little cap in context, and am delighted to be able to make the pattern available.

These caps were worn by Dickensian clerks (think Mr Fezziwig), layered under other headwear by Crimean soldiers and even issued to polar explorers. A fun addition to you costuming repertoire! 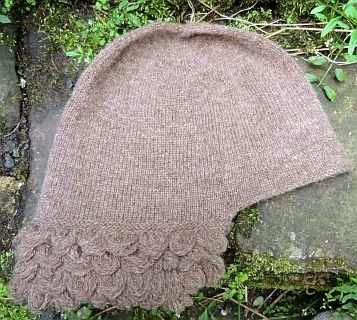 Its been a while since I posted, so here is a simple, seasonal little something to cheer up an autumn day: 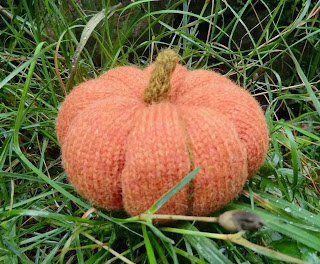 These are a doddle to make starting with a short section of tubular knitting. I cranked mine out on the antique sock machine, but you could knit yours or even re-purpose an old sweater sleeve or a dead but decent sock. Mine is a good size for a pincushion, but any size goes with these.

I've written up instructions over at Downsizer: http://www.downsizer.net/Articles/Make_your_own/Little_Knitted_Pumpkins/

And finally, because I can, here's Tesla the kitten modelling one. I have been warned that ginger kittens will eventually get their revenge for such sartorial slights, but I'm going to enjoy it whist he's small enough to put up with it without complaint ;) 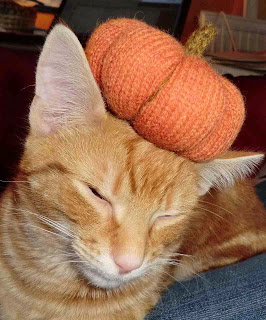 Recently (July/Aug 2013) the bronze age masterpiece known as the Mold Cape has been on tour in Wales, away from its usual home at the British Museum.

I've had the great privilege of being involved with some of the activities associated with its visit to National Museum Wales in Cardiff, amongst which was being invited to design a knitted interpretation of the cape to be used in the Clore Discovery Gallery as a handling and discussion tool.

Our bronze age ancestors did not use knitting, but they certainly had an eye for design, and the original beaten gold cape is ornamented with textures believed to represent beads and draped textiles. Knitted structures work well to evoke the general feel of this in a fun way which also stimulates discussion about comparisons between flexible textile forms and the rigid structure of the metal version which would have restricted arm motion.

Several people have expressed an interest in having a go at knitting one of these themselves, so I'm delighted to be able to announce that the pattern for my 'knitted Mold Cape' is now available as a Ravelry download: http://www.ravelry.com/patterns/library/bronze-age-capelet 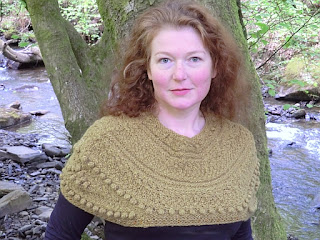